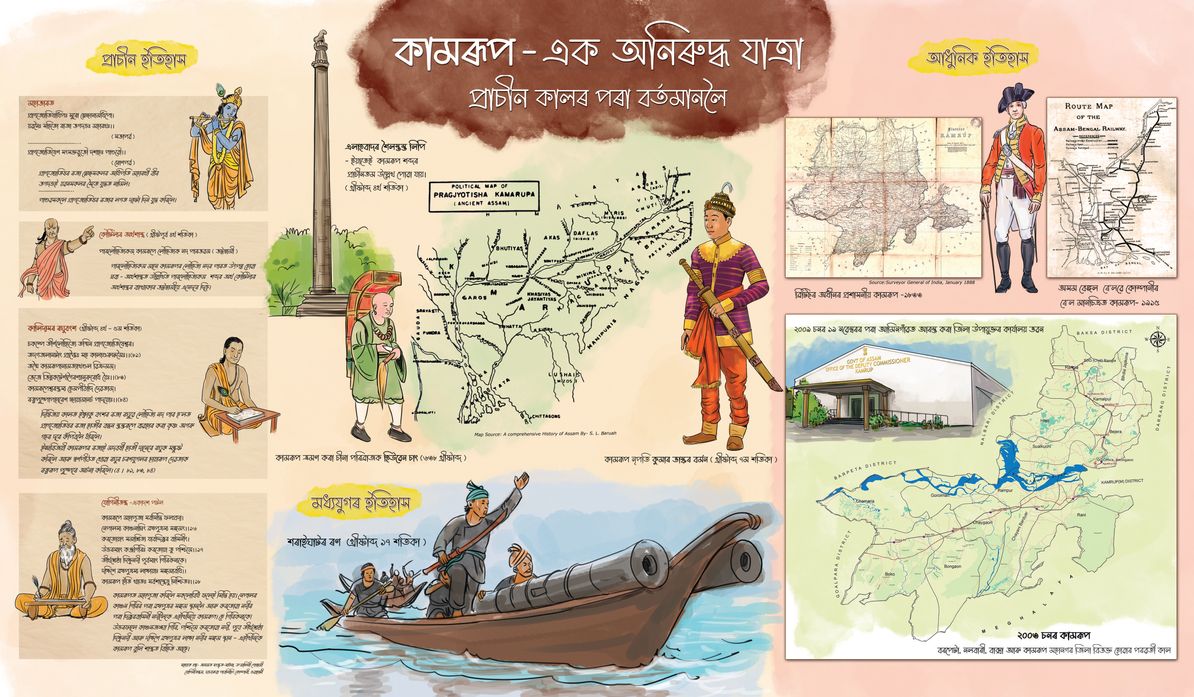 The history of kamrup started from time immemorial. Previously Kamrup was described as Kamrupa. Kamrupa is an ancient name of a large country, often confused with the name of Pragjyotishpur. A section of historians believe that the name of Pragjyotishpur is older than Kamrupa, while another section of historians  believe that Pragjyotish or Pragjyotishpur was the capital city of Kamarupa. Pragjyotishpur was referred to in the scriptures like the Ramayana, the Mahabharata, and other ancient texts. Sanskrit poet Kalidas referred to Pragjyotishpura in his book Rajatarangini while Chanakya in his immortal book "Arthasastra" made references to kamrupa.. Subsequently, we can find references to Kamarupa in the "Kalika Purana" and also in the "Jogini Tantra".

Some people believe that the name of Kamrupa has some linkage with God Kamadeva (Indian Cupid) and Goddess Kamakhya. These questions of etymology should be left to the Linguists and researchers of ancient Assam history.

There is a famous story which says the reason behind the naming of this place "Kamrup": Lord "Shiva" married Parvati, the daughter of Daksha, a very powerful king of that time. The King however, did not like his son-in-law for some reasons and hence did not invite him for the "Jagna" (the great sacrifice) ceremony which the king organised in a great fashion. Parvati being the daughter of the king could not resist from attending the ceremony and went there with the permission from her husband. As she reached the auspicious venue, "Daksha" did pass on derogatory comments on her husband and that too in front of a huge gathering. She became very annoyed and got disgusted at the discourtesy shown to her husband and sacrificed her life on the spot itself.

Overcome with grief at the death of Sati (Parvati), Shiva began a grim penance and wandered about the world carrying her dead body on his head. Shiva's 'dance of death' and penance alarmed all the gods because it threatened to destroy the world. In order to stop the frightful wanderings of Shiva, the supreme god, Vishnu, cut the dead body of Sati into fifty- one pieces with his great weapon, the "Shudarshan Chakra" (Discus). The pieces fell onto the earth in fifty-one different places and wherever they fell, the ground was held to be sacred. One of the important organs of Sati fell on Nilachal hill in Guwahati and the place was thenceforth held sacred and it says that the famous Kamakhya Temple was originated from that "Sati's" organ only.

As Shiva continued to do penance, the other gods became afraid that he would thereby acquire universal power. They sent Kamadeva, the God of Love, to make Shiva fall in love again, and thereby break his penance. Kamdeva succeeded in his mission, but Shiva was so enraged at the result that he burnt Kamadeva into ashes by a fiery glance of his third eye. Kamadeva eventually regained his life and his original 'form' (Rupa) in Assam and the land where this took place become known as "Kamrup" ("Kamarupa").

The kingdom of Kamrupa was a vast one, from the Kartowa river in the west and up to the border of Nepal and Bhutan in the east,covered under four sub-regions – Kampeeth, Ratnapeeth, Saumarpeeth and Suvarnapeeth. Every sub-region has its own boundaries. This vast kingdom with four sub-regions was under different dynastic rules from the ancient past. The earliest king of kamrupa was Mahirang Danab. After him Hatakasur, Sambarasur and Ratnasur ruled the country in dynastic succession. “ Asur” here meant the king of the non-Aryan race.

Ghatak was yet another most powerful king of Kamrupa. He was killed in a war by Narakasur, one of the most powerful and legendary kings of Kamrupa. He had great attraction for Goddess Kamakshya. He built the road to the top of the temple site with stones, the story goes. King Naraka was killed by Lord Krishna. Bhagadatta, son of Naraka, was made the king. Bhagadatta helped the Kauravas in the battle of Kurukhetra. These are all mythological angles of the history of Ancient Kamrupa.

A clearcut history of kamrupa can be traced from the 7th century AD, from the reign of Kumar Bhaskar Barma. During his time, Kanauj- Thaneswar was ruled by King Harsabardhana. Kumar Bhaskar Barma maintained cordial relationship with King Harsabardhana. During the time, The Chinese visitor, Huen-Tsang came to kamrupa and wrote a long note about Kamrupa.

Kamrupa during the colonial British government.:

The colonial British government took possession of Assam from 1826, and declared kamrupa as a district under Assam. The name Assam came only during the Ahom rule. Even after he   end of the colonial rule the district continued for some time. Today, the big district of Kamrup has been divided to six parts, and all the six parts are made independent districts. They are Kamrup, Kamrup Metro, Nalbari, Baska, Bajali and Barpeta.